In a previous tutorial, I talked about how to stretch a single lyric across several notes using pitch bend. The other option is to enter the lyric as separate notes. For instance, let's say I have:

And I want to stretch the lyric say across several notes. I can enter the phonetics like this:

followed by a bunch of

Go ahead and enter that in and see what you get. Sounds horrible, doesn't it? Vocaloid is singing it back as separate notes. Obviously we don't want that. Nobody would sing it as Say ay ay ay ay. We want a smooth blending of the sounds, like Say-a-a-a-ay.

We can accomplish this by putting a hyphen in front of the phonetic, like this: 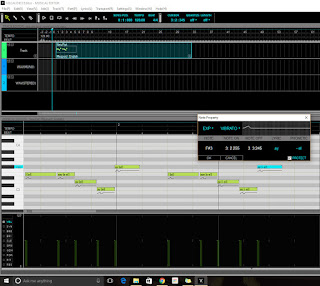 In the picture above, the first notes have been entered without altering the phonetic. Those notes are sung back as separate sounds. But in the second grouping, I've added that hyphen in front of the phonetic eI. This tells Vocaloid that this is connected to the previous phonetic sound.

You can listen to the difference.