Hey everyone, here's a new song to cap off 2017! It was done an example for the 2017 Losertown Japan Grab Bag Giveaway! You know, there still is time to whip up an original Vocaloid song and enter!

This is the first song we did using our new Presonus Audiobox USB 96 interface. Before we were messing around with a cheap XLR to USB cable. The cable is okay if that's all you have, but the sound using an actual USB audio interface is so much better!

Now that we have a proper interface, Megumi wants us to do an actual album! I'm kind of nervous about that, but Yasuko and I agree--we should do it! So that will be our project for 2018! In the meantime, I'm trying to learn as much as possible about mixing.

Posted by Steven Mon at 8:05 PM No comments:

Megumi says Happy Thanksgiving to everyone!

Posted by Steven Mon at 1:40 PM No comments:

Have you heard the growl function in Vocaloid 4 and would like to use it--but you only have Vocaloid 3? Well, you can kind of emulate that by using VST plugins! Using an overdrive or tube amp simulation plugin can give vocals a bit of grit and gruffness to emulate singers with throaty vocals, like Joan Jett or Courtney Love.

I like to use Bitcrusher, which comes with Presonus Studio One Artist. There are many free "Bitcrusher" VST plugins around, but they all are a little different and sound a little different, so don't be afraid to test them out if you want to use a Bitcrusher type plugin.

The key is to apply just a light touch just to give the vocals some edge. You'll also notice that it makes the singer sound like she is singing into a live mic on stage.

Using the VST plugin in a DAW rather than in the Vocaloid editor gives the advantage of being able to use automation to control where, when, and how much of the effect to apply to the vocals.

Below is a video with an example of Gumi singing the opening verse from Hole's Celebrity Skin. What do you think? Do you think the growl function in Vocaloid 4 sounds better?

Wow, it's been nearly a year since the last post. I can't believe so much time has gone by so fast.

It was last summer that Megumi decided to take up gardening. Just like that, she dropped playing the guitar. I looked at Yasuko and asked, "Is she kidding?" Yasuko reassured me that this was just a phase and that Megumi would pick up the guitar again very soon.

A couple of weeks went by, and after that, it turned into months. I pleaded with Yasuko to talk to Megumi, but she insisted that there was nothing she could do. "I can't force her to play the guitar!" she said.

That left me and Yasuko with not much to do. A drummer and a bass player without a guitar player...Oh, Yasuko can play some guitar and I can play some keyboard, and we tried tinkering around with writing, but without Megumi, we couldn't really put together anything. After a while, I was pretty much resigned to the idea that The 3Represents was over.

One day, I was watching YouTube videos when Megumi stopped by to visit Yasuko. She saw me laughing at my computer screen. "What's so funny?" she asked. I was watching that rather infamous video of Courtney Love and Hole performing Celebrity Skin. You know--the one with her isolated vocals and guitar.

I played the video for Megumi and she didn't have quite the reaction I expected. She didn't find it funny at all. Instead, she was absolutely transfixed by it. "She's so powerful!" she said. Then she told me to play other videos with Hole performing. After that, she got her mojo back.

When Megumi started writing again, she wanted to play around with different sounding chords. For this song, in the verse, she uses:

And then in the chorus, she moves up two frets to the 7th fret: 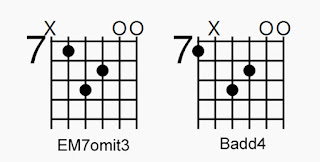 I don't even know if those are the proper names for those chord voicings. I just punched them into a chord naming I found on the Internet. Yasuko came up with most of the lyrics which was inspired from her perusal of the subreddit /r/asianparentstories. She has a lot more ideas from that so she and Megumi are working on new songs.

This song is also a lot faster than what Megumi normally writes at, clocking in at 142 BPM.